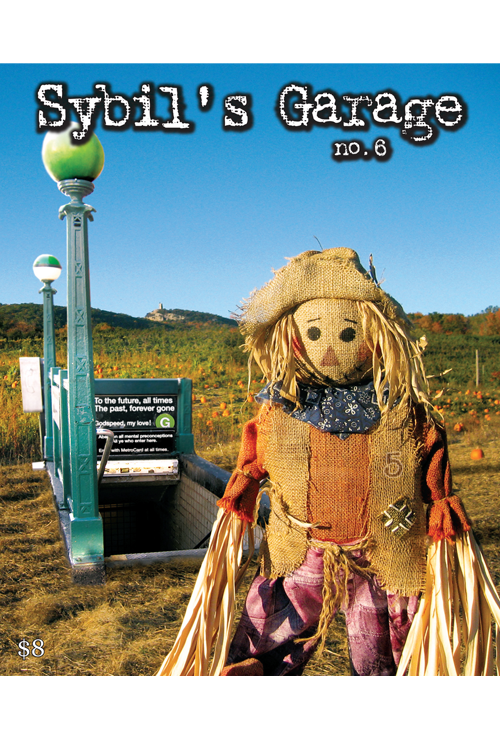 Let’s all get on the G train and take a ride into speculative land. Descartes had it right. Cogito ergo Sybil.

When you lie awake dreaming at night, do you know that Sybil lies awake and dreams about you?

Here’s what else Sybil dreams: She dreams of a world where humans are an endangered species. A universe where creatures are born, live, and die without ever touching the ground. She dreams of a town where once a year all men go mad, and of a community where basketball becomes the artbiter of life or death. Where children are trees that live in the desert and where ghosts drink your whiskey when your husband’s away. And when she awakes, Sybil wonders if you still exist, or if you were just a figment of her imagination.

“Sybil’s Garage [is] one of the best run and downright prettiest of the small press magazines…”
–  Escape Pod, Stephen Eley, Editor, (listen to podcast)

“It’s a stylishly put together magazine, There’s plenty of poetry, art, and nonfiction in addition to the stories…My favorites included Simon Petrie’s “Downdraft”, set on another planet with intelligent zeppelins and flying human-like people. This story is about a young flyer’s ill-advised attack on one of the zeppelins — a story really about misunderstanding, with no bad guys. Also, Becca de la Rosa’s “Not the West Wind”, about, variously, and among other things: a woman in love with a guitar, the west wind, Ireland, and a foundling girl; and Sean Markey’s “Waiting for the Green Woman”, about a man with a tree for a daughter. Other strong work came from Eric Del Carlo, Genevieve Valentine, and Stephanie Campisi.”
– Rich Horton, on his blog (read the full review)

“Another grouping of SF/fantasy little magazines could perhaps be described as the Lady Churchill’s Rosebud Wristlet circle. One fine fairly new example is Sybil’s Garage. Its sixth outing has plenty of fine stories and poems.”
– Locus, Rich Horton (print only)

“Issue six of Sybil’s Garage from Senses Five Press is fun. ..Reading it is like wandering into a house party where you not only mingle with the guests, you peruse the décor and absorb the mix of tunes emanating from the stereo.”
–The Fix, Dan Alamia (read the full review)

“This is the most interstitial volume of the innovative magazine to date.  From the composite front photograph of a scarecrow emerging from a New York subway station (the G line) into a lonely pumpkin field to Susannah Mandel’s surreal page entitled “Metamorphic Megafauna” …this issue ranges widely through genres and your brain.”
– The Interstitial Arts Foundation, Delia Sherman (read the full review)

“The stories were varied and all worth reading. It’s moved its home from Hoboken to Brooklyn but is still a unique mix of unusual stories, poems and articles, all with suggestions on the appropriate music to play while reading…Sybil’s Garage is still a strange little magazine with old-fashioned illustrations accompanying the text. For those that want their fiction to be truly different, this is for you.”
– SFRevu, Sam Tomaino (read the full review)

“Ever since first discovering the magazine Sybil’s Garage in 2005 after being shown it by Kris Dikeman, I’ve loved the small press magazine produced by Matt Kressel of Senses Five Press. The magazine’s steady climb in quality moves to upward from an already pretty high starting point, and this issue shows the trend continuing.”
– Fantasy Magazine, Cat Rambo (read the full review)

“One of writer Damien G. Walter’s challenges is that “We need more beautiful magazines” and Sybil’s Garage No. 6 easily fits that bill. While not as experimental as McSweeney’s, editor Matthew Kressel does a lot of outstanding things with this issue. Aside from the well-designed layout, each story/poem is preceded by a recommended song and this presentation is consistent. There’s also what seems like random scribblings by an enigmatic writer at the end of various texts but it all culminates into one meta-narrative that this reviewer found tear-jerking, even if it’s just a simple plot and conceit.”
– Bibliophile Stalker, Charles Tan (read the full review)

“This issue, a salon of gorgeous language and music, has something for everyone and is well worth exploring for an afternoon, curled up in your favorite chair.”
– The Fix, Rae Bryant (read the full review)

“Sybil’s Garage is a strange little magazine with old-fashioned illustrations accompanying the text. If you like some tales out of the ordinary, then this is for you… The stories all got a Very Good from me.”
– SFRevu, Sam Tomaino (read the full review)

“Readers will want to dive into this fantastic collection of work again. With each new perusal, another layer of meaning is uncovered.”
– The Hudson Current, Diana Schwaeble (read the full interview)

“…features different themes that focus on betrayal, aging, and communication, [and] leaves the reader feeling as though they have entered a new realm.”
– The Hudson Current, Diana Schwaeble

“Sybil’s Garage No. 4 is an alienating thing—a saturation tank of isolation and the sublime. Like its first three predecessors, Issue 4 aligns the quietly bizarre and the slightly uncanny with nineteenth-century design. That’s not to say that Sybil’s Garage is easily classifiable, either in form or content. Victorian woodcuts share pagespace with postmodern silhouettes and modernist sketches. Fragments of polyglottal marginalia pepper Sybil’s pages—appearing everywhere like cryptic typesetter’s notes. From the first glimpse of the Bladerunneresque cover to the final, stunning woodcut, this issue is its own work of slipstream art.”
– Behind the Wainscot, Darin Bradley

“If you like ‘alternate’ science fiction, then this is for you.”
– SFRevu, Sam Tomaino