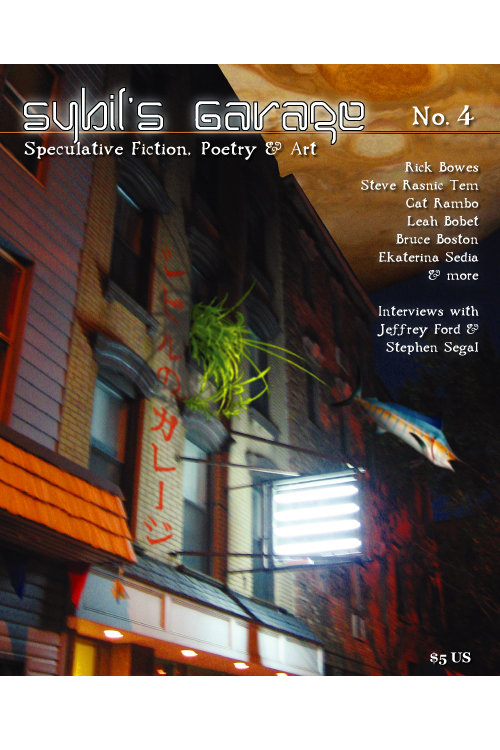 Sybil’s Garage digs deep into the substratum of the weird with issue number four. Part science-fiction, part horror, part fantasy, part none-of-the-above, these stories and poems do not begin and end in predictable places. This issue contains brooding, intelligent, heart-stopping fiction from veteran masters such as Steve Rasnic Tem and Rick Bowes, trips into the bizarre from Leah Bobet and Ekaterina Sedia, haunted dreams and disturbed visions by Cat Rambo and Barbara Krasnoff, and much more. Poems by masters of the craft Bruce Boston, JoSelle Vanderhooft, Aurelio Rico Lopez III and others delight, amuse, disturb…

But…if you think that’s all there is, then you’ve never read Sybil’s Garage. Each issue is an intense visual experience. Rich, detailed engravings from the 19th century complement the very best in fiction from the 21st. You’re not just reading the magazine, you’re journeying. Below each title is a suggested musical accompaniment. Choose to listen at your leisure or peril.

This is, without a doubt, our best issue yet.

“Arrive on Time,” by Bruce Boston
“If the Shoe Fits,” by Aurelio Rico Lopez III
“Frayed Worlds,” by David C. Kopaska-Merkel & Wendy Rathbone
“Farewell,” by Jaime Lee Moyer
“One of the Reasons,” by Kristine Ong Muslim
“The Answer Compounded,” by J.C. Runolfson
“Disparate Parts,” by Rachel Swirsky
“Flesh into Sand,” by JoSelle Vanderhooft