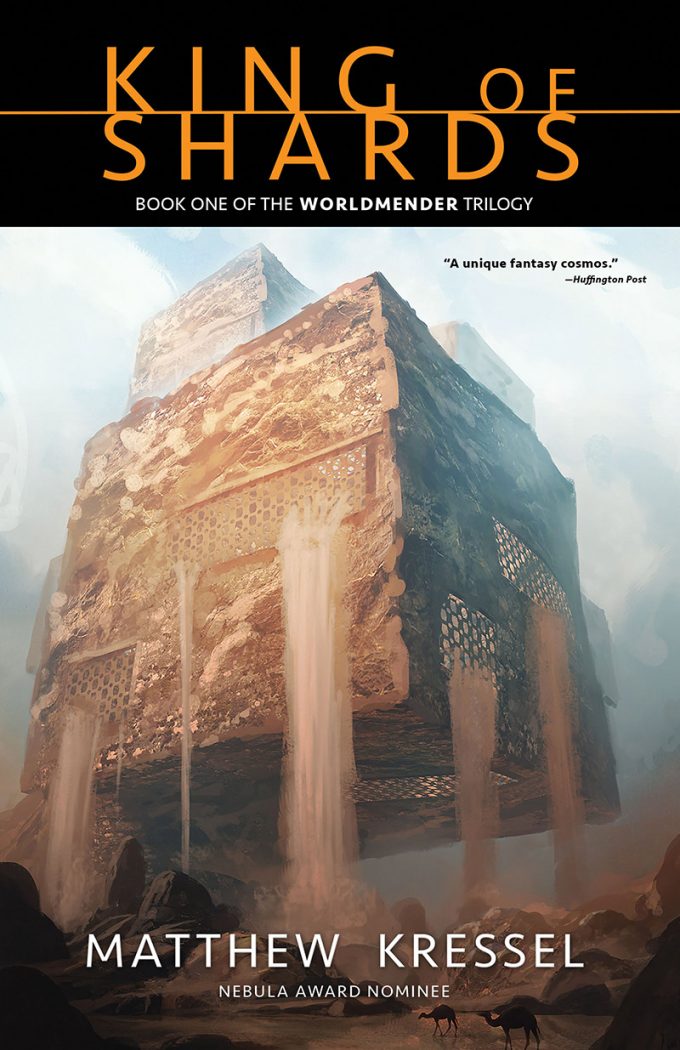 Book One of the Worldmender Trilogy

Available Here and At

Across the ineffable expanse of the Great Deep float billions of shattered universes, the Shards. Populated with vengeful demons and tormented humans, the Shards need Earth to survive just as plants need water. Earth itself is kept alive by thirty-six righteous people, thirty-six hidden saints known as the Lamed Vav. Kill but a few of the Lamed Vav and the Earth will shatter, and all the Shards that rely upon it will die in a horrible cataclysm.

When Daniel Fisher is abducted on his wedding day by the demon king, Ashmedai, he learns he is a Lamed Vav, one of the hidden righteous upholding the world. The demon Mashit has usurped the throne of demonkind from Ashmedai and has been systematically murdering the Lamed Vav. On a desert-covered Shard teeming with strange creatures, pursued by a fearsome demon army, Daniel and Ashmedai, saint and demon, must join forces to stop Mashit before she destroys all of existence. Daniel’s survival means he must ally with evil Ashmedai. Yet who but a saint – a Lamed Vav – can save the world?

Praise for King of Shards

“A fantastic twist on Jewish mythology…a radical reinvention of Jewish faith and folklore, not to mention the portal fantasy…”One city’s rubble is the next city’s foundation,” Kressel writes. Not only does that simple, profound idea underpin King of Shards’ plot, it’s the method to the book’s majestic, resonant, reality-twisting madness.” — NPR Books

“Kressel draws heavily on Hebrew legend and biblical lore to build a robustly imagined fantasy world…Kressel advances his plot briskly through a series of alliances, betrayals, separations, and reunions, and the veiled motives of several of his characters keep his story pleasingly unpredictable. His skill at extrapolating traditional religious lore into the stuff of fantasy bodes well for future books in the series.” — Publishers Weekly

“With surprising twists and a deep and detailed universe, King of Shards, the first in a trilogy, is likely to be remembered for more than its Jewish roots.” – Barnes & Noble Sci-Fi and Fantasy Blog

“In this prismatic tale of demons, righteous warriors, and multiple universes, Kressel plumbs the depths of Kabbalistic lore to create a unique fantasy cosmos. Daniel Fisher’s wedding day becomes a nightmare when he finds himself transported to a harsh desert world–and discovers his intended bride is a demon. It turns out Daniel is one of the Lamed Vav, the thirty-six righteous people who are destined to fight evil. To stop the ravages of the demon, Daniel must go on a terrifying journey and form unlikely alliances along the way in this engaging new epic fantasy.” — The Huffington Post

“[A] fascinating first novel…King of Shards is the first entry of the Worldmender Trilogy, and its use of Hebrew culture and legend to build a complex, dynamic setting serves to imbue every page with an epic mythos. Kressel presents a compelling alternate reality that readers can escape to while also pondering the nature of what is real.” — Shelf Awareness

“Matthew Kressel’s King of Shards is an imaginative, intelligent, and soaring debut that mixes Jewish folklore/mysticism and modern-day social politics. The result is a unique spin on epic fantasy that is both timeless and timely, and a hell of lot of fun. You’ll want to follow Daniel and Rana through the Shards. Trust me.” –Paul Tremblay, author of A Head Full of Ghosts and The Little Sleep.

“With his debut novel King of Shards, Matthew Kressel rips a young man out of present day New York and plunges him into the depths of his family’s secret history. This is a world where the mysticism of The Kabbalah and Torah begin to seem like everyday commentary, where ordinary people attempt to live their lives despite the extraordinary turmoil of unending conspiracy, secret saints, scheming demons, and shattered universes. This novel shakes the foundations of everyday reality, and the ensuing chaos is pure pleasure.” –Christopher Barzak, author of One for Sorrow and Wonders of the Invisible World

“With King of Shards, Kressel threads portal adventure through ancient mythos. His demons and demi-gods and his very human (or mostly human) characters have to work their way through the terrifying, violent, and often beautiful alternate planes he’s built using his incredible imagination and traditional and Apocryphal knowledge as a tableau. You will emerge transformed.”
— Fran Wilde, author of Updraft

“A gripping trek across a unique desert world rich with Kabbalah-inspired magic and vivid demons builds to a whirlwind climax. Daniel, taken from our world, and Rana, uprooted from her life on hers, grapple with the power of their destinies, and its danger, to both our world and the entire cosmos.” — Scott H. Andrews, World Fantasy Award-nominated editor of Beneath Ceaseless Skies Magazine

“Kressel does an excellent job in fashioning a fantasy world based on Jewish lore and in creating interesting characters and a suspenseful plot. Although it took time to understand the underlying theology of the Shards, that didn’t slow the action.” — Rabbi Rachel Esserman for The Reporter Group