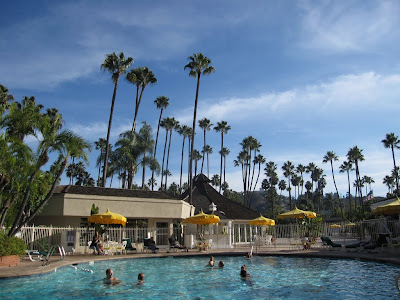 I know I’m back in New York by the sounds.  This morning I heard in no particular order a garbage truck, jack hammer, saw, helicopter, airplane, car horn and siren.  In San Diego, home of the World Fantasy Convention, my mornings were filled with the sounds of trickling fountains, buzzing hummingbirds, and a delicate wind.  The Town and Country resort was set up like a maze.  You literally had to walk through various gardens and gates, around pools and through courtyards to get anywhere.  It was beautiful and bewildering, and Kit Reed suggested the place was meant to keep us happy and compliant, like the town in the Prisoner.  As a garbage truck idles outside my window and the men haul bags of clanking bottles into it I’m starting to think that wouldn’t be half bad.

Too much happens at a con to summarize easily.  So I’ll try to summarize my thoughts before they all fade into a blur.

I met Charles Tan in person, who was flown to the U.S. all the way from the Philippines based on a fund that Lavie Tidhar set up. We were all strangely enough nominated for a World Fantasy Award in the same category (Special Award, Non-Professional), but the award went to Alisa Krasnostein for her work with Twelfth Planet Press.  Yeah, I’m not going to lie, it would have been cool to win, but I really wasn’t expecting too, and I was happy to see Alisa go home with the Lovecraft bust.  Charles is also twice as nice in person as he is online.

On Friday night I had dinner with Kit and Joe Reed and Jeff Ford and a few of Jeff’s former Clarion classmates.  (One was Rebecca Rowe and forgive me but I can’t recall the other’s name.)  Kit was her usual charming self and Jeff was awesome as usual.  When I told Jeff he and I had a reading at the same time and I was sad to miss his, he graciously offered to merge our readings into one.  Jeff is one of my favorite writers, so this was pretty damn awesome. Turns out we both are in Ellen Datlow and Terri Windling’s After anthology, so we both read our stories from that.  Jeff’s piece was about a high school where all the kids pack guns and wear them as accessories.  It was amazing as usual.

The parties are kind of a blur, but highlights for me include hanging out with the Canadian ChiZine Press crew, Brett Savory and Helen Marshall, and Robert Shearman of the UK who wrote the Doctor Who episode “Dalek.”  I don’t think I’ve laughed that hard in years.  Had a lovely chat with Leanne Renee Hieber, spoke politics and future WFCs with Jetse de Vries, awards with Gordon Van Gelder, and economics with Rani Graff from Israel.  Also lots of fun hanging out with the Australian crew, who may perhaps be the snarkiest people on the planet (I like snark.)  Friday night we were on the lawn chairs at 3 a.m. talking Australian football with DoSelle when the security guard shut us down.

Saturday, N.K. Jemisin threw her pajama party, where there was Twister, sippy-cups, the game Operation.  I got to see Ellen Datlow playing Hungry Hungry Hippo like it was nobody’s business.  I wore my PJs, but just for a little while.  World Fantasy has never been keen on costumes.

(Pillow fights on the other hand are encouraged.) 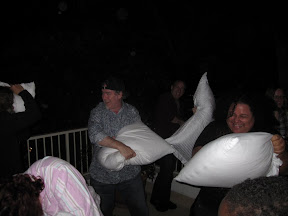 I also did a reading for JoSelle Vanderhooft’s Steam-Powered series.  A little more intimate than a conference room, we staged the reading in one of the suites, and I got to hear a lot of young, talented writers, like C.S.E. Cooney read excerpts of their stories.  I read the beginning of my piece “The Hands That Feed.”  Also got to spend some time talking novels with JoSelle and Eric Vogt, who both are working on novels where the gender disparity is much greater than our 51/49.  The ideas were so cool, I smelled a James Tiptree award on the breeze.

What else?  As you can tell, I haven’t been talking too much about the panels.  I didn’t go to many.  Devin Poore sat on a panel with Harry Turtledove about ships and sailing in speculative fiction, and it was cool (and frightening) to hear stories of some of the panelists describing the sensation of being lost in fog, or watching bioluminescent creatures approaching.  Devin’s Navy experience, as well as the other panelist’s varied and knowledgeable backgrounds made the panel a highlight.

At the awards banquet I got to sit next to the fabulous and fabulously dressed Kate Baker, where we talked Sybil’s Garage and novel writing as her glittery dress dropped sparkly powder over everything she touched.  We said the dust were tiny dead fairies. 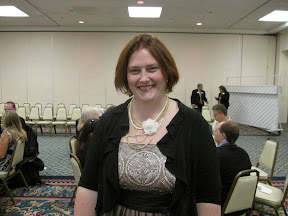 Connie Willis gave a hilarious toast, and Neil Gaiman was his usual charming and audience-flattering self.

And, no, as I said, I didn’t win.  I was rooting for Mercurio and Nora too, but alas they didn’t win either.  Still, I was happy just to see my friends nominated, to see their hard work recognized, and I’m really happy for the winners too.  There’s always next year, and the most important thing to take home from any con is the desire to keep doing what we love: reading and writing.  And that, despite the New York noise, I did.

(You can see a few photos I took of the con here.)

Was Rebecca Rowe’s Clarion classmate (the one with whom you had dinner) Tenea Johnson?

There’s a picture of her the whole Clarion 2004 class here: http://homepages.wmich.edu/~kaldon/2004-Clarion-Workshop-Experience.htm

Hi Gordon. Yes it was Tenea. In fact, she’ll be reading at KGB in August 2012 with Jeff Ford.